What are the Spanish Steps in Rome?

What are the Spanish Steps? Why are they called that? Who built them and why? 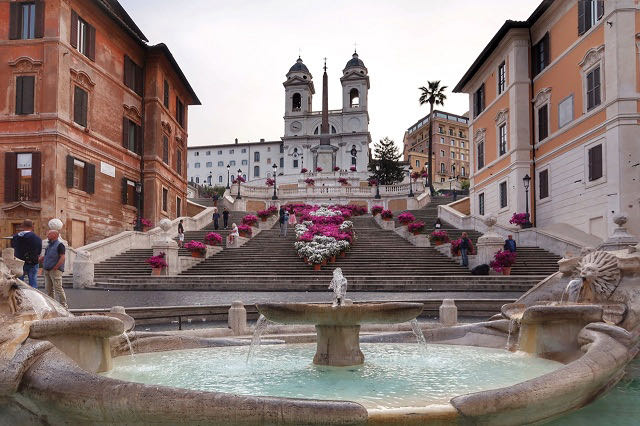 Find out the answers to these questions and more!

What are the Spanish Steps? - A short history

Yes, the famous Spanish Steps in Rome are worth visiting.

They are usually on most "top-ten" lists of things to see in Rome.

But why should you see them? Why are they called the Spanish Steps? Who built them and why? What is the meaning of the fountain at the bottom?

The most famous steps in Rome Italy

To answer the question "What are the Spanish steps?", we have to talk about the different parts that make up this monumental stairway, and, as with the history of just about everything in Rome, we have to go through a period of a few hundred years.

On this page, you'll find some quick and fascinating facts about the Spanish Steps in Rome, including a brief history of:

We'll start our explanation of what are the Spanish Steps from the top and work our way down. 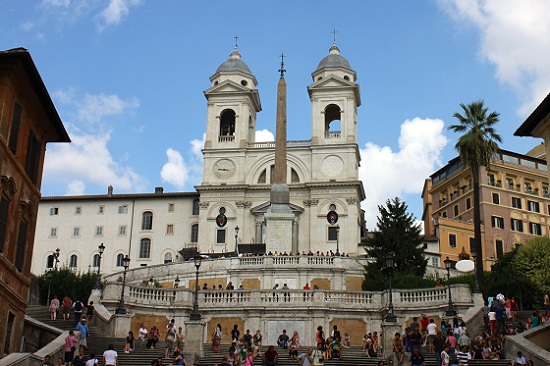 The church has been there since the 1500's and originally, there was just a sloped hill in front of it, going down to the square below.

It's worth a visit inside the church to see two paintings by Daniele da Volterra.

His "Deposition" is probably his most famous work and it's said that it was his good friend Michelangelo who provided the sketch for it. I also love his other work in this church, the "Assumption of the Virgin Mary." 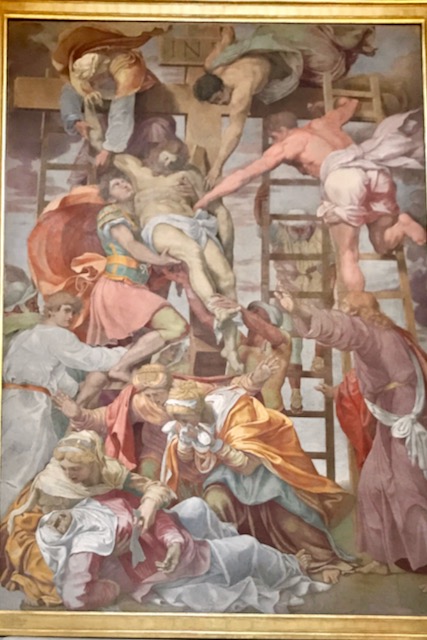 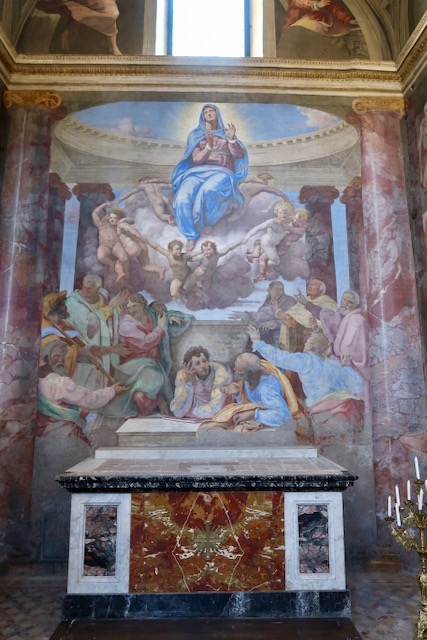 The obelisk at the top of the Spanish Steps 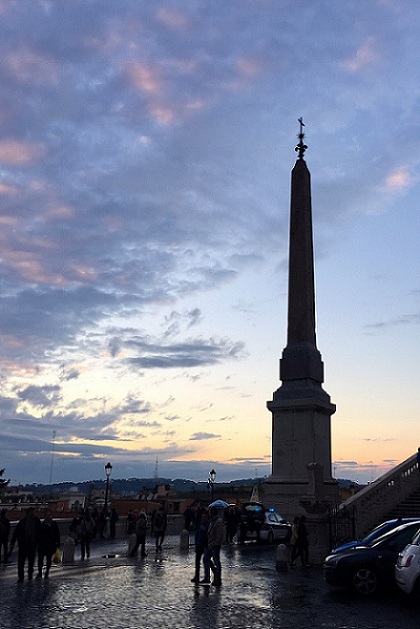 Why is there an obelisk at the top of the Spanish Steps?

The obelisk in front of the church looks Egyptian but in fact it's a Roman copy.

The original is twice the size and you can find it in Piazza del Popolo just down the Pincian hill from the church.

The obelisk is called the Obelisco Sallustiano, because it was made in the early years of the Roman Empire for the Gardens of Sallust.

So this obelisk is a mere 2,000 years old as opposed to original Egyptian obelisk in Piazza del Popolo which is around 4,000 years old.

You can get a good look at it from the staircase of the church.

The answer may surprise you especially considering that the Spanish Steps were a French project! 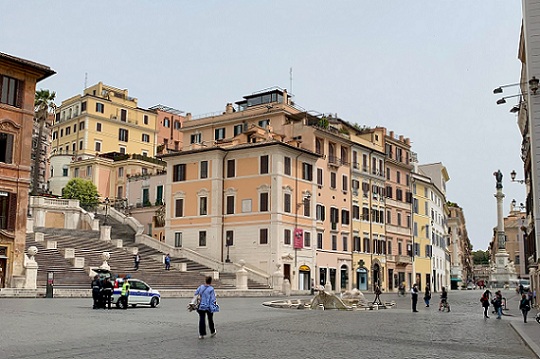 What are the Spanish Steps? It starts with the Piazza di Spagna, or the Plaza of Spain.

The "plaza" at the bottom of the Spanish Steps is sometimes called "The Spanish Square" in English, although it is definitely not square shaped. (It's kind of like a sharp-edged hourglass, with the smallest point being the bottom of the steps, and the larger ends fanning out left and right from there.)

In the 18th century, nearby Porta del Popolo (where Piazza del Popolo is) was the main entrance to Rome. Inns popped up in the area to accommodate visitors to the city. The overall area became known as the Strangers' Quarter. 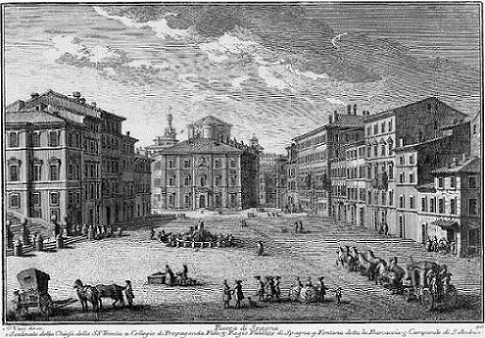 An etching by Giuseppe Vasi from 1752 shows the square known even then as Piazza di Spagna thanks to the Spanish Embassy to the Holy See which was then as it is today on the right-hand side of this image.

Anyway, the plaza is called Piazza di Spagna in Italian because of the Spanish Embassy to the Holy See, which has been based there since 1647. For more about this history, check out one of my favorite Roman-history websites, Romeartlover.

And finally to the main question on this page - what are the Spanish Steps?

In the mid 1600's, the king of France started negotiating with the pope about how to build a staircase that would link the French church at the top with the plaza below.

In between the two there was just a dirt-covered hill. 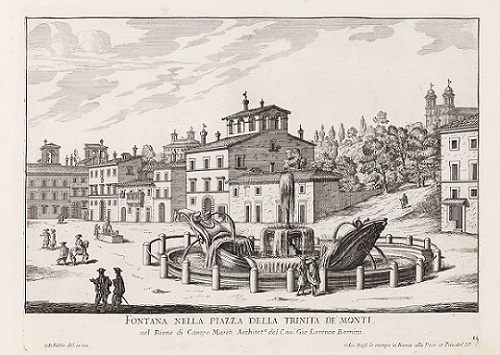 What are the Spanish Steps? They are a staircase that was designed to connect the French church at the top of the hill with the Spanish Square below. Until then, it was just a dirt hill separating the two.

This discussion (and ensuing arguments) went on for about 100 years (with different kings and popes, of course) until finally, in 1717, Pope Innocent XIII held a contest and commissioned the design to Francesco de Sanctis and Alessandro Specchi.

LA BARCACCIA - THE FOUNTAIN AT THE BASE OF THE SPANISH STEPS

The fountain at the bottom is called "La Barcaccia", which means "ugly boat."

As much as I love the name, I can't say I agree with it! 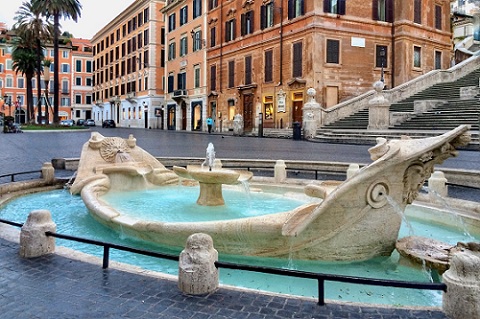 The Barcaccia fountain at the bottom of the steps was designed by Pietro Bernini with some help from his son Gian Lorenzo Bernini.

The fountain was built by the father of one of Rome's most famous and prolific architects, Gian Lorenzo Bernini: Pietro Bernini. It seems that Gian Lorenzo may also have helped in the design.

The barcaccia was built in 1627-29, and the reason it is attributed more to the father than to the son is that Pietro Bernini was in charge of the distribution of the water from the Acqua Vergine, one of Rome's ancient aqueducts that had only been recently restored.

Low water pressure from this aqueduct was likely the reason for the design of the boat.

Historic landmarks near the Spanish Steps

What are the Spanish Steps famous for besides the staircase and square?

As the area was popular in the 1700s and 1800s as a stopover for visitors to the city on the Grand Tour, a few vestiges of those days still remind us of what this neighborhood must have been like back then.

Romantic English Poet John Keats moved to Rome in hopes that the mild climate would cure him of his illness (tuberculosis). 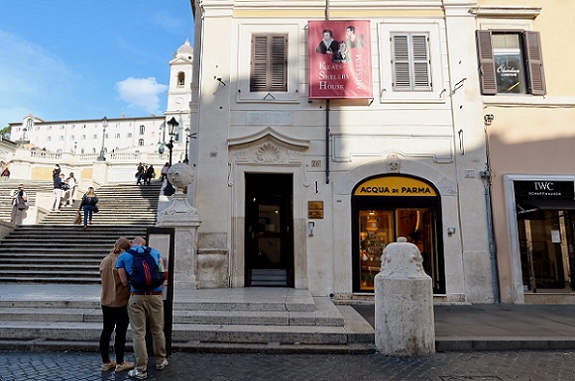 What are the Spanish Steps? They are also known as the place where English poet John Keats lived and died in the 1800s.

Sadly, he had not counted on the damp winters we can get here. Keats died in Rome in 1821 and is buried here in the Protestant cemetery, along with other luminaries such as Percy Bysshe Shelley.

The house Keats lived in is just to the right of the Spanish Steps at the bottom, and is today a museum, the Keats-Shelley House. It's worth a visit to see how the poet lived, and to see something a bit unusual in Rome.

In another example of the English influence over the area around the Spanish Steps, Babington's Tea Rooms is an iconic spot just to the left of the bottom of the staircase. 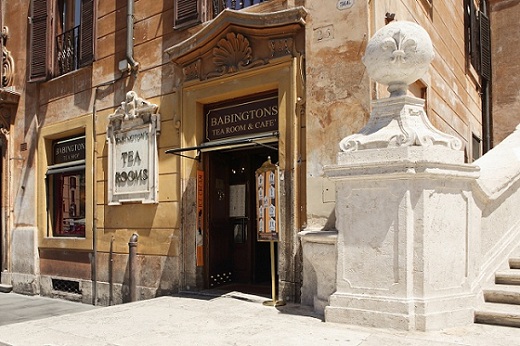 Opened in 1896, it harks back to a bygone era and is an absolutely delightful spot to enjoy tea, snacks, and my favorite, brunch! 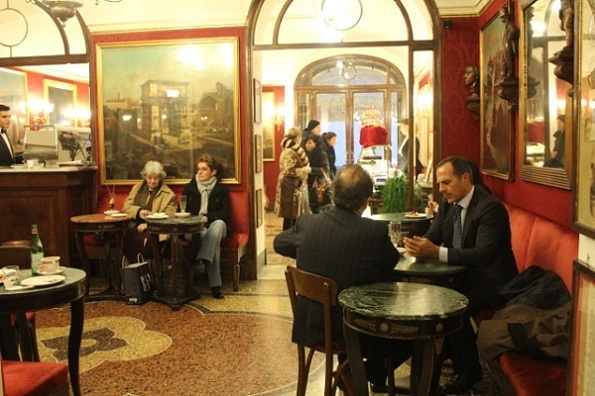 Caffè Greco became the favorite haunt of artists, writers, and other luminaries such as Keats, Byron, Casanova, Goethe, Shelley and Wagner. The decor today is still reminiscent of the grand coffee house's original roots, with art on the walls by some of its favorite artist-patrons over the centuries.

It's not inexpensive to sit down and enjoy a coffee or tea here but it is fun and cozy, particularly in winter.

While it may not seem to fit in with the rest of the famous spots near the Spanish Steps, one piece of the Spanish Steps' history includes the opening of the first McDonald's in Italy, on March 20, 1986. 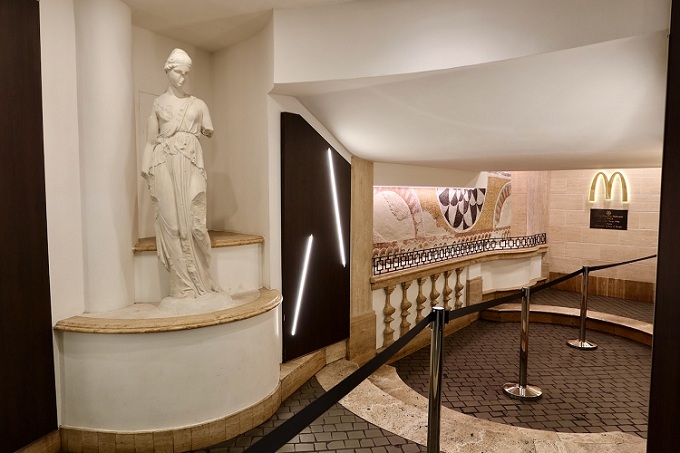 This sparked protests which lead a mayor of a northern Italian town to launch the Slow Food movement, which stands against fast food among other things.