Can you travel to Rome now? Visit this page to find out the rules .

Looking for the latest news about the Coronavirus in Rome Italy? Visit this page.

The Basilica of Santa Maria Maggiore Rome should be on your list of must-see churches.

Not (only) because it's a Papal Basilica, or because it's the largest church in Rome dedicated to the Virgin Mary . . . 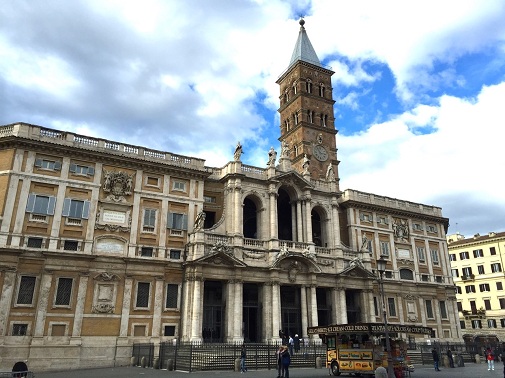 The Basilica of Santa Maria Maggiore - one of only 4 major basilicas in the world!

Visiting Santa Maria Maggiore Rome - Everything You Need to Know

I am definitely partial to this church. It's one of my favorites in Rome. Let's start with why I love it so much. Here's what you need to know about visiting this amazing basilica:

It amazes me every single time. Here are my favorite things to see and do in Santa Maria Maggiore Rome: 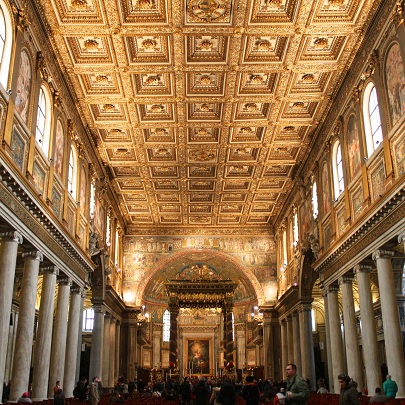 And how about visiting what looks like an 18th-century basilica, only to find its inside looks like a 4th century (Ancient Rome) basilica? 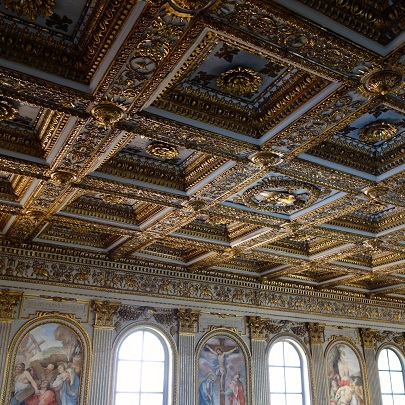 The ceiling? It's the original wood from the 15th century, and it's covered in gold brought over from the new world by Columbus for Queen Isabella and Kind Ferdinand of Spain!

And how can you forget those glimmering 4th century mosaics? 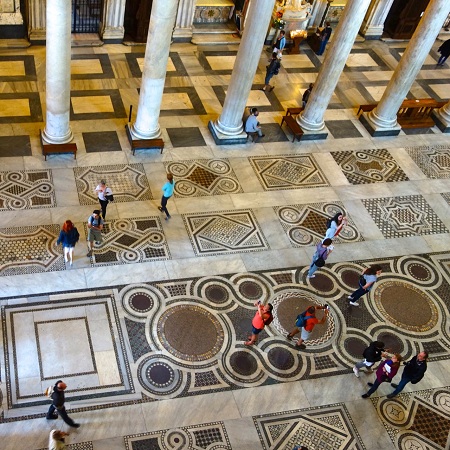 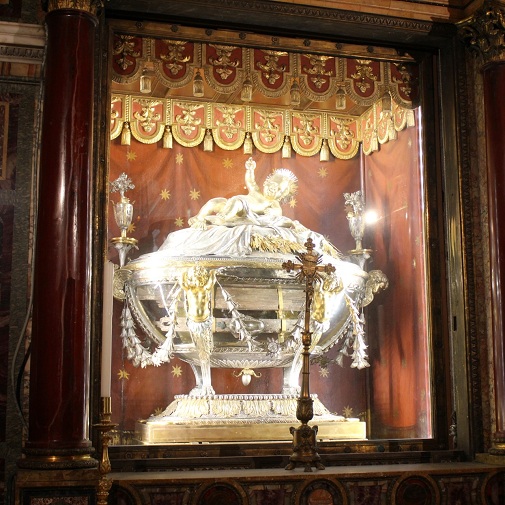 You don't want to miss a closeup viewing of a piece of Jesus' crib brought here from Bethlehem in the 7th century. 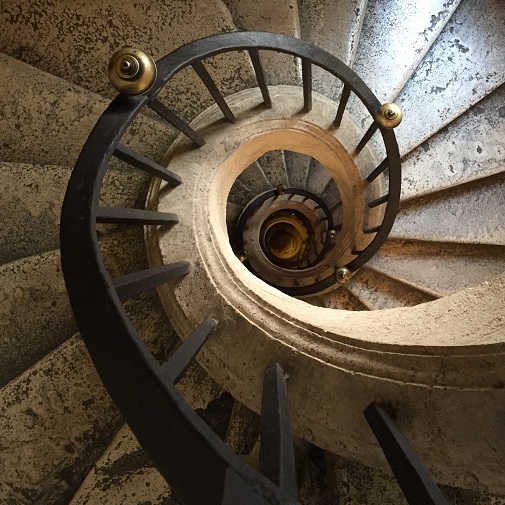 How about visiting the tomb of Gian Lorenzo Bernini, one of Rome's most famous, genius, and prolific sculptors and architects? Better still, why not check out Bernini's hidden spiral staircase? 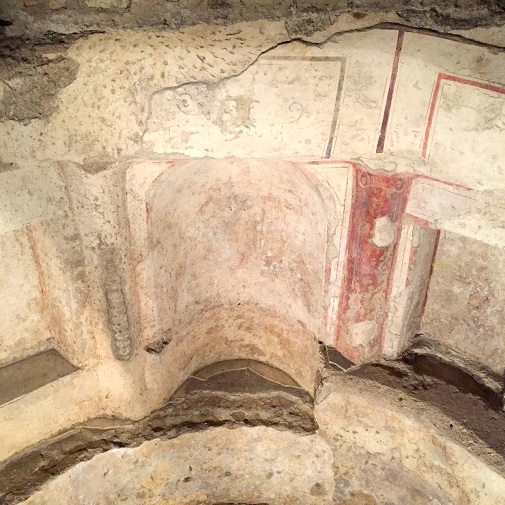 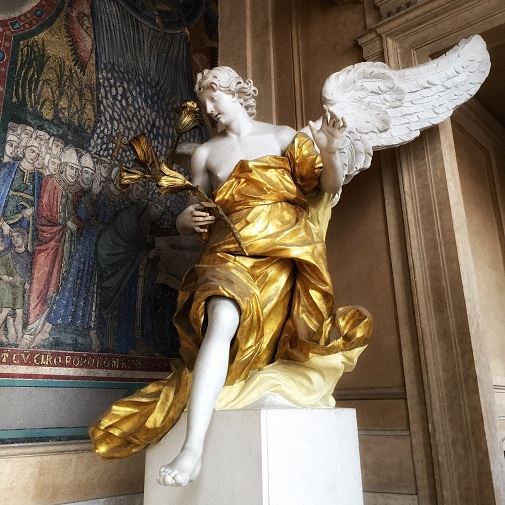 It's a really awe-inspiring church with a lot of history, and different architecture styles . . .but the main reason to visit Santa Maria Maggiore is just to see how beautiful it is.

Don't you want to see the site of a miraculous August snowfall that happened in the 4th century?

Whether you are on a religious pilgrimage, or just visiting Rome and looking for some of the beauty and history this city has to offer, here is everything you need to know about visiting Santa Maria Maggiore Rome:

Santa Maria Maggiore Rome - one of the four Major Basilicas

Santa Maria Maggiore (Saint Mary Major) is one of only 4 patriarchal/major basilicas in the world, which, by the way, are all in Rome: The other 3 are Saint Peter's; Saint John in Lateran; Saint Paul Outside the Walls.

Technically, the four major basilicas in the world are not all in Rome.

Saint Peter's basilica is in Vatican City, which is its own state, and not in Italy.

But it is so easily accessible while you are visiting Rome, let's just say that you can visit all four of these basilicas in one Rome visit.

In 2006, Pope Benedict declared the term Patriarchal Basilica to be obsolete, and now the four churches of Saint Peter, Saint John in Lateran, Saint Paul Outside the Walls, and Saint Mary Major are called Papal Basilicas, or Major Basilicas.

It's easy to just visit Santa Maria Maggiore, walk in, walk around and soak up the scenery.

It's a massive church, and there is so much artwork, so much gold leaf, and so many little side chapels and cupolas and things to see at every turn, you can simply enjoy the view and that's that.

There are many websites and books with lots of details about this basilica's history and architecture so I won't repeat them here. Let me just give you the nitty-gritty of what to see:

There are two façades to Santa Maria Maggiore Rome: The original one was

The Column in the Piazza

Santa Maria Maggiore is the largest of 26 churches in Rome dedicated to the Virgin Mary (hence the name, Maggiore, or Major/Most.)

Santa Maria Maggiore was built at the top of Cispius, the highest part of the Esquiline hill, which is the highest of the seven hills of Rome. The medieval bell tower of the basilica is also the tallest in Rome, at 75 meters.

You can easily reach the basilica via the Metro lines A or B at Termini train station. It's only a 5-10 minute walk from there.

Bonus! There are two caffe's on the piazza that are open daily from 6am.

When I say daily, I mean on Christmas Day, New Years Day...

There is something magical about having a cappuccino and croissant on Christmas Day at dawn, and having the piazza and the church all to yourself. 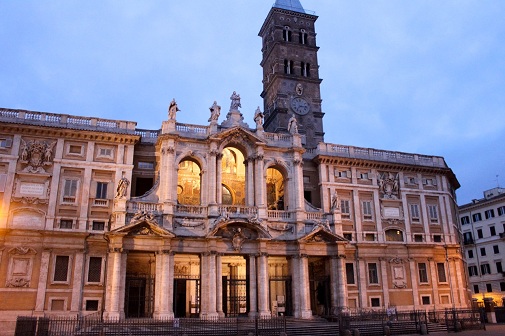 Where is Santa Maria Maggiore Rome?

In the below map of Rome, you can see where Santa Maria Maggiore is located, in relation to the Termini train station, and also to the other 3 major (papal) basilicas in Rome.

In the below map, you can see the layout of this basilica, with some of the most important spots highlighted.

Get your  free Rome trip planner!

Simply sign-up today for our free newsletter and get the Romewise Quick-start guide to Rome .

I removed them to make this page load faster and thereby improve your page experience.

I am happy to answer your questions / comments!

Please come over to the Romewise Facebook page , or, if you want to send me a message, visit my Contact Me page .

Disclosure : If you make a purchase through a link on this page, I may receive a small commission - at no extra cost to you. Thank you for supporting my site!