Basilica of St. John Lateran - Why it's one of the most important churches in Rome

Why is the Basilica of St. John Lateran one of the most important Catholic churches in Rome, if not the world? 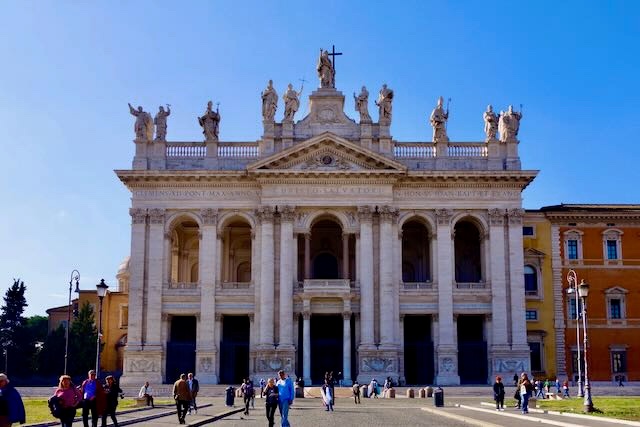 You need to see the oldest basilica in Rome for yourself to understand how magnificent it is!

Read on to discover why this cathedral is so important, and how you can visit it.

On this page we'll cover:

Why is the Basilica of St John Lateran important?

While there are 4 papal basilicas in the world, all in Rome, St. John Lateran is the most important of them all, because it is the home of the bishop of Rome, the Pope.

Pope Francis lives in Vatican City, and performs mass more often at Saint Peter's Basilica than at the other papal basilicas, but St. John Lateran is the Pope's church in Rome. 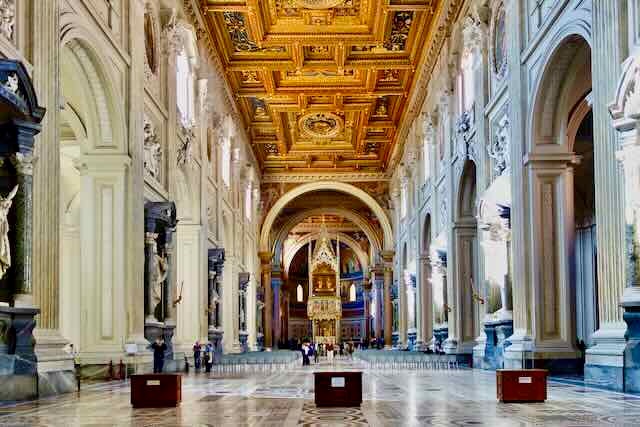 When you first enter the central nave of the cathedral, take a moment to admire all its treasures on display before exploring further!

Basilica di San Giovanni in Laterano is also known as the Archbasilica of Saint John in Lateran because it's considered the mother church of all the churches by Roman Catholics.

It is also not only the oldest Catholic church in Rome, it's the oldest church in the West - older even than St Peter's Basilica!

What does the word Lateran mean?

Lateran means "belonging to the Laterani family" in Latin.

In the fourth century, a family named the Laterani owned a large piece of land on the Caelian Hill, where the basilica now stands.

The family sold the land to Emperor Constantine I in the year 313.

He then gave it to Pope Miltiades, who built a church on the property.

The Lateran palace was once the home of the popes before the residence moved to the Vatican. You can see the Lateran Palace just next door to the church.

Did you know the Pope has a summer residence?

It's just outside of Rome at Castel Gandolfo.

When was the Archbasilica of Saint John Lateran built?

The first church on this site was consecrated by Pope Sylvester I in 324.

That church was destroyed in the 5th century by Vandals and Visigoths.

Over the next centuries, it survived fires and an earthquake in 897. It was rebuilt every time.

The current building dates from the 17th century, mostly to designs by Francesco Borromini, and is a beautiful example of Baroque architecture.

Important architects who worked on the Lateran basilica

Over the centuries, the basilica was either repaired or reworked under various popes.

The most important renovations were carried out by Francesco Borromini between 1646 and 1667, and by Alessandro Galilei in 1735.

Other important architects who worked on this church include Giacomo della Porta and Domenico Fontana.

What is the origin of the bronze doors of the Lateran palace?

The enormous bronze doors at the entrance of St. John Lateran once belonged to the Curia Julia, or Senate House in the Roman Forum. 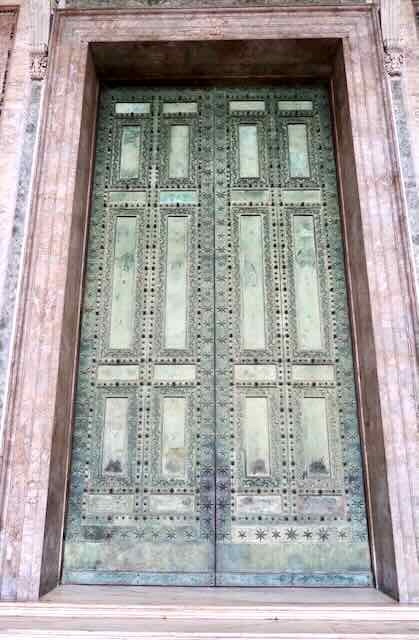 An excellent example of artefacts from the Roman Empire being reused, the bronze central doors of the basilica were once the doors to the ancient Senate building.

The doors were brought to adorn San Giovanni in Laterano in 1660 when people were starting to discover ancient Roman history more, like the Colosseum. As huge as they were, they are too small for the space they were to fill, so a frame was built around them.

What are the statues on top of St John Lateran?

In the early 18th century, the façade was designed by Alessandro Galilei, a relative of Galileo Galilei. There is a 7-meter tall statue of Jesus on the central pediment, with statues of St. John the Baptist and St. John the Evangelist on each side. 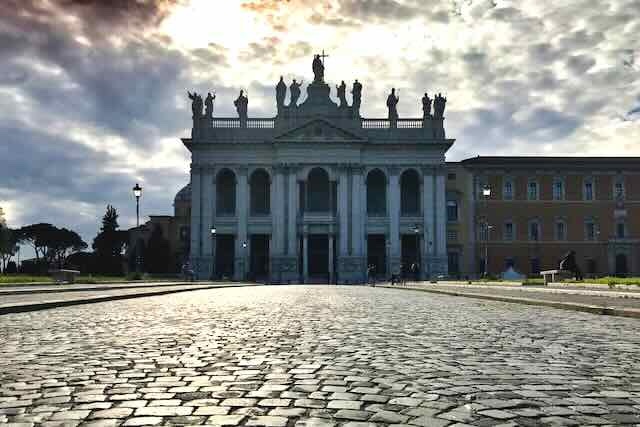 They in turn are flanked by the 12 Doctors of the Greek and Latin Churches.

What important things are there to see inside the Basilica of St. John in Lateran?

The word cathedral comes from the word "cathedra", meaning chair.

This refers to the special chair on which the bishop, or in this case the pope, presides over services. 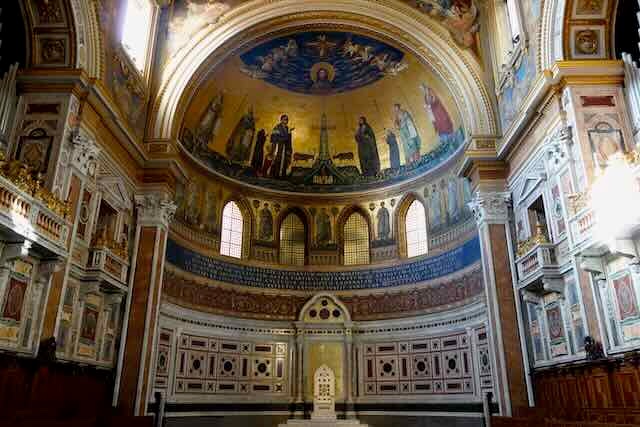 As well as the stunning mosaics, you will also see this gorgeous medieval cattedra

In the apse of Saint John Lateran, you can see a medieval papal cathedra. There is an even older one in the Cosmatesque cloister (see below.) 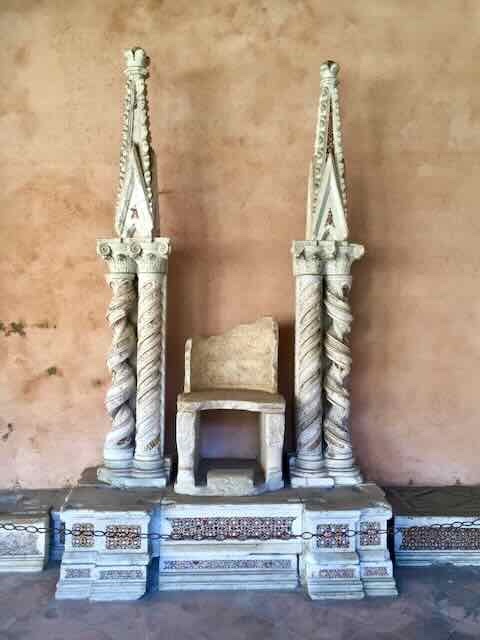 In St. John Lateran, you will find several important relics.

It also contains two images of Saints Peter and Paul, the patron saints of Rome. These busts contain what are said to be their respective skulls, or at least parts of their skulls. 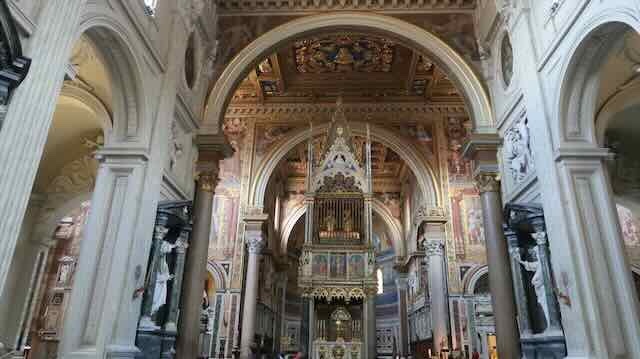 The central Gothic structure holds relics of Saints Peter and Paul, and dominates the church.

To the left of the main altar is the Altar of the Holy Sacrament. At the top, there is a small bronze relief sculpture depicting the Last Supper. Behind this, in a reliquary, is a fragment of the table used at that meal.

Inside the Basilica of St. John Lateran, there is an exquisite Cosmatesque cloister, built between 1288 and 1350. 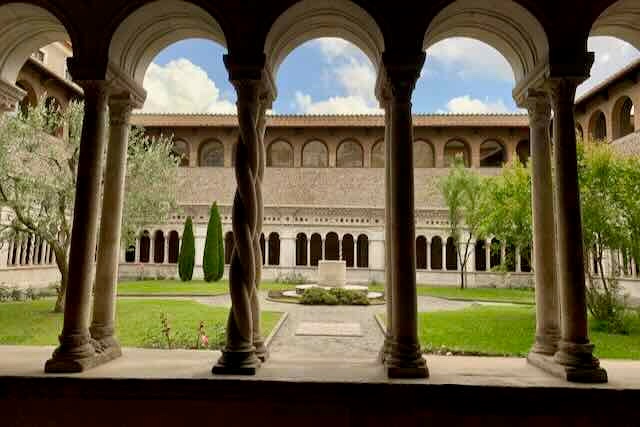 Many visitors skip seeing the cloister, but it makes for an excellent addition to your visit!

To visit the cloister, you'll need to purchase a ticket.

Is the Lateran Basilica in the Vatican?

There are 4 papal basilicas, actually known as the four Major Basilicas, and they are all in Rome. Or rather, three of them are in Rome and one, Saint Peter's Basilica, is in Vatican City.

The other three, Saint John Lateran (San Giovanni in Laterano), Saint Mary Major (Santa Maria Maggiore), and Saint Paul Outside the Walls (San Paolo Fiori le Mura), are technically in Rome, however, thanks to the Lateran Treaty, they are all considered property of the Vatican, and therefore functionally part of Vatican City.

San Giovanni in Laterano is the official cathedral church of Rome, even though it is not in Vatican City.

Any police you see inside these churches are Vatican police rather than Italian police.

What was the Lateran Treaty?

The Lateran Treaty was a treaty between the Kingdom of Italy and the Holy See, signed on February 11, 1929.

It recognized Vatican City as an independent state and granted Catholicism special status in Italy.

What is the best way to visit the Basilica of Saint John in Lateran?

Admission is free, but if you want to visit the cloister, you'll need to purchase a ticket, which you can do inside the basilica on the left-hand side. 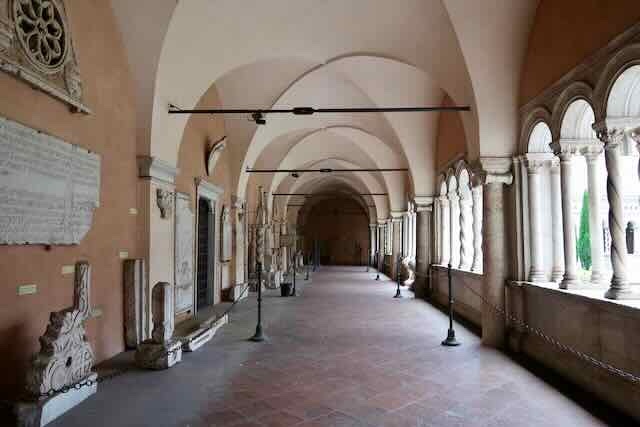 View of the cloister of St John Lateran

If you're interested in learning more about the history and art, we recommend St John Lateran's basilica tours, or you can book an audio guide if you prefer to explore at your own pace.

What are the Mass times in St. John Lateran?

What else is there to see nearby?

Whether you are on a religious pilgrimage, or just want to see more art and historical artifacts, you could easily spend a full day near this Catholic church.

The Holy Stairs, Scala Sancta, are located in a building attached to the basilica. 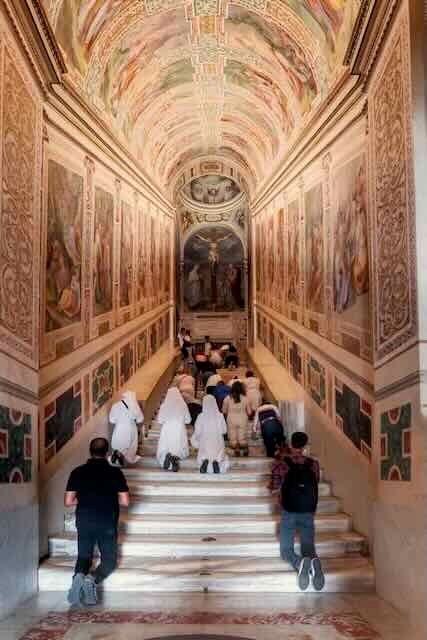 Pilgrims climb the holy stairs on their knees, but you can walk up a separate set of stairs alongside them as well.

They are, allegedly, the stairs that Christ climbed when he appeared before Pontius Pilate.

For a long time, only pilgrims who crawled up the 28 steps on their knees were allowed to ascend them, but you can also walk up (or take the elevator).

Book this exclusive tour where your guide will show you the basilica, the baptistery and the Holy Stairs for a truly in-depth visit!

Further along the street is the Basilica of the Holy Cross in Jerusalem (Santa Croce in Gerusalemme), which contains some of the wood from the crucifixion cross, as well as pieces of the crown of thorns. 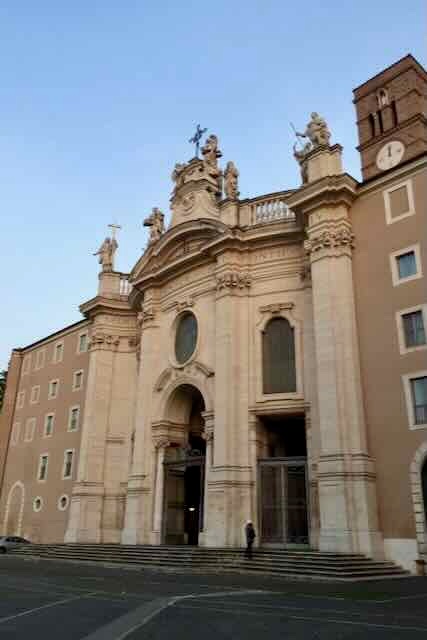 The church of Santa Croce in Gerusalemme

It also has a gorgeous original Cosmatesque floor. 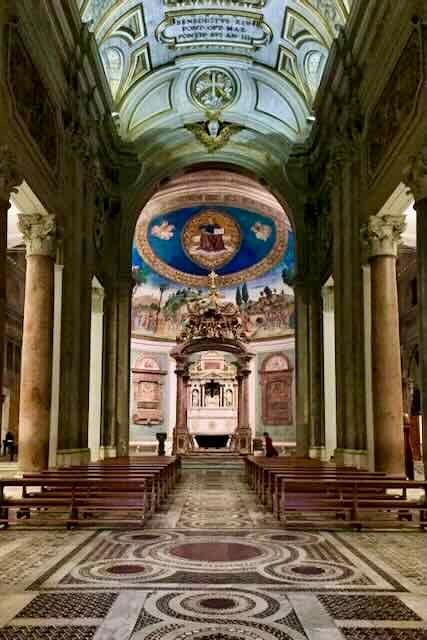 The inside of the church of Santa Croce in Gerusalemme

The Lateran Baptistery (Battistero Lateranense) is a separate building behind the church. 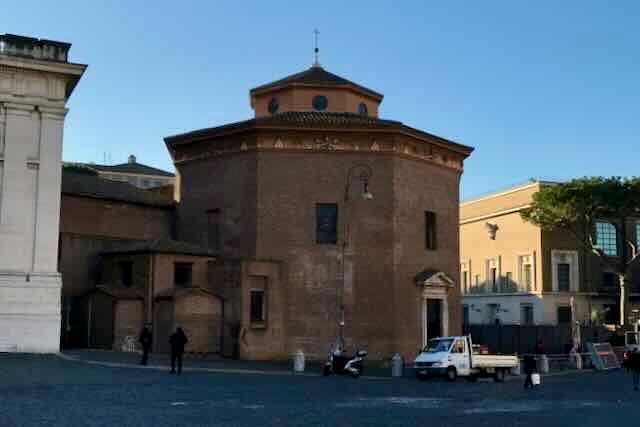 Outside view of the Lateran Baptistery

It's the oldest standing baptistery in Rome, and was once the main baptistery for the city. 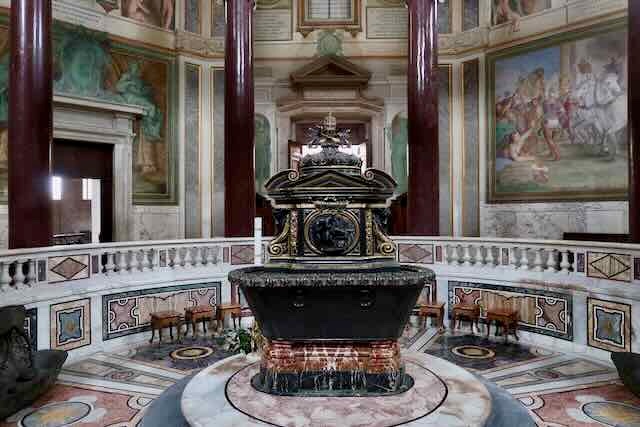 Interior of the Lateran Baptistery

Adjacent to the church stands one of Rome's ancient Egyptian obelisks, from around the 15th century BCE. It originally stood in Karnak. 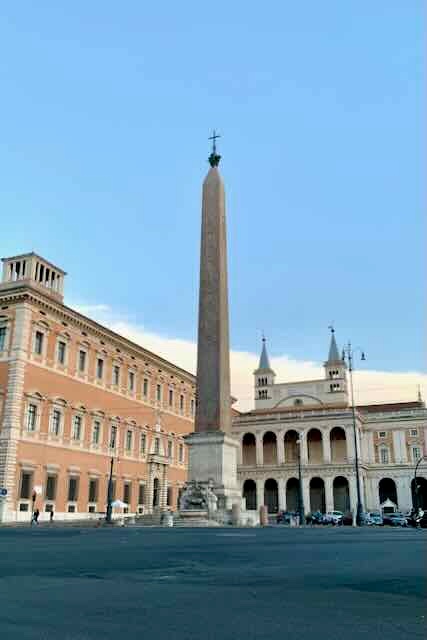 It is the tallest standing Egyptian obelisk in the world, at over 105 feet (32 meters) tall. If you include the cross and base, it reaches nearly 151 feet (46 meters). It weights 455 tons.

While is is one of the oldest, if not THE oldest obelisk in Rome, it was the last to be brought to Rome from Egypt. (The obelisk in Saint Peter's Square may or may not be older, but its exact age is disputed.)

It was moved to its current location in 1588 under Pope Sixtus V.

How to get to St. John Lateran cathedral?

The best way to get to St. John Lateran is by public transportation.

The basilica is located near two metro stops, Manzoni and San Giovanni, on Line A. Many buses stop here as well.