Planning to be in Rome on New Year's Eve?

Find out everything you need to know about what to do and what to expect! 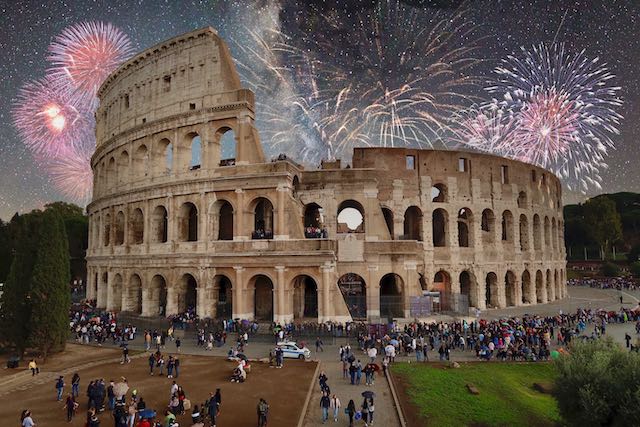 New Year's in Rome is a lot of fun, although it doesn't exactly look like this photo I doctored. But you will see fireworks in Rome. Find out how and where!

The photo above is just a simulation of what fireworks look like in Rome on New Year's.

But there are fireworks all around Rome, including near the Colosseum.

Read on to find out where to see them, and other ideas for things to do on New Year's Eve and New Year's Day in Rome!

Rome New Years Eve - Everything You Need to Know

If you will be in Rome for New Years, here's what you need to know:

Rome is a great place to spend New Years Eve! 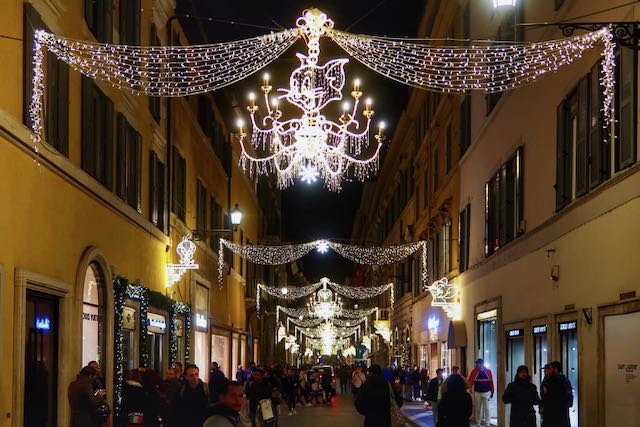 There is a very festive ambiance in Rome during the holidays.

There are plenty of options for enjoying a sumptuous New Years Eve dinner (cenone), fireworks, and a general atmosphere of partying and fun.

Many Romans have dinner at home, or at friends' houses, then go out afterwards to walk around soaking up the atmosphere and to watch the fireworks.

Tourist-wise, it's generally busy in Rome from just after Christmas through the 6th of January (the Epiphany, or what in Italy is called Befana.)

With the exception of New Years' Day, just about everything is open, the city is beautifully lit up, from the shops, to the street-decorations, to the giant trees at Piazza Venezia and in Saint Peter's Square.

Rome New Years Eve - what to do

OUTDOORS Things to do in Rome new years eve

The most popular event for New Year's Eve in Rome is typically the huge concert and show in Circus Maximus.

The events on this page are being updated for 2022/2023. All information is accurate and up to date as of this time. Program is subject to change without notice.

The Christmas Market in Piazza Navona is back for 2022!

Where to see the fireworks in Rome New Years Eve

From midnight, there will be fireworks going off all around Rome, for about 15 minutes.

You can see fireworks from large monuments, piazzas, and bridges in Rome, where you might already be celebrating anyway.

If you can get to a high up vantage point, you will have great views. 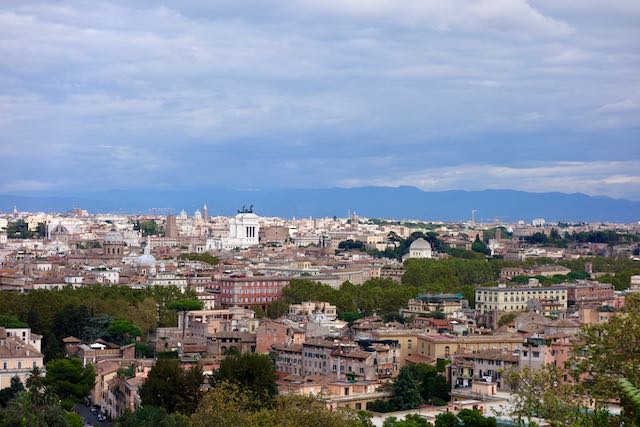 One of the best spots for viewing fireworks in Rome is high up on the Gianicolo Hill.

Such points include the Gianicolo Hill (a fairly large, wide-open space that can accommodate a lot of people), Pincio above Piazza del Popolo, the Orange Tree Garden (a smaller space and it will be crowded), and any rooftop you can get to.

Great viewing spots include hotel rooftops, so even if you don't go to one of their cenone (big dinner), you can try the rooftop bar (you will need to reserve).

It won't come cheaply though!

Drinks on any hotel rooftop bar are almost always steep, any time of the year. But it might be worth it to view all the fireworks around you.

(For those asking where to watch fireworks without crowds, the only way to do this is at a private home of someone with a rooftop. All the public spaces will likely be full of people and pretty loud.)

If you don't feel like being out in the cold, or dealing with large street crowds and noise, you might want to spend New Years Eve in Rome indoors.

The Three Tenors - Enjoy New Year's Eve Concert in Rome in the beautiful Caravita Church in the center of Rome.

The singers are some of Rome's most talented, and they do credit to the original Three Tenors.

Sparkling wine after the concert is included.

Greet the new year in Rome with a beautiful lyrical concert of classic opera and concert music. Works include pieces by Puccini, Strauss, Rossini, Verdi, Mozart, and many more.

There's nothing like Don Quixote to ring in the New Year.

See this beautiful ballet in one of Rome's official opera halls, the Costanza Theater.

Check out the Rome Gospel Festival at the Rome Auditorium.

There will be a special New Year's Eve show by DaNell Daymon & Greater Works Choir.

Held in the beautiful theater of Santa Chiara complete with cocktail bar, this intimate event is a lovely way to spend an evening, including New Year's Eve, in Rome.

How to get around in Rome New Years Eve

For more about public transportation in Rome New Years Eve (and New Years Day), visit the ATAC website (much of this page is available also in English but holiday schedules are in Italian only.)

Taxis will be hard to come by. Don't count on finding one easily!

And if you are thinking you will just use Uber, think again. Find out more about taking taxis in Rome here.

Well this one's kind of a no-brainer: In Rome, New Years Eve is cold. It's winter.

But for some reason, and this is, of course, only anecdotal, I don't remember it raining (and definitely not snowing!) for any of the New Years Eves I've spent in Rome. And I've been here for New Years every year since 1997.

So count on cold weather (and rain, because you never know.)

Bundle up! Especially if you will be standing still in a piazza, or to watch fireworks. Wear warm gloves, a scarf and a hat.

Wear layers too, starting with a kind of silk/cashmere/light wool undergarment like a tank top, camisole, henley or t-shirt. 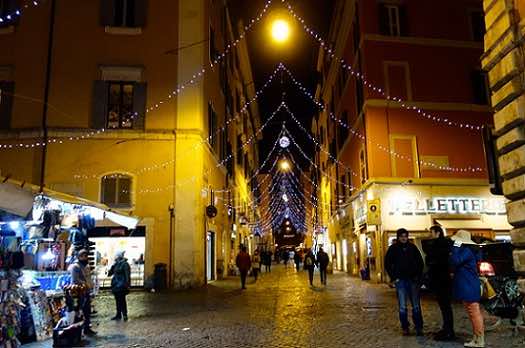 At Campo dei Fiori in Rome during the holidays, you can see how bundled everyone is. Hats, scarves and gloves are key!

You may not be surprised to know that Italians ring in the new year with spumante or prosecco (sparkling wine) and with fireworks displays starting at midnight.

Here are some more interesting Italian New Years Eve traditions you may not have heard of: 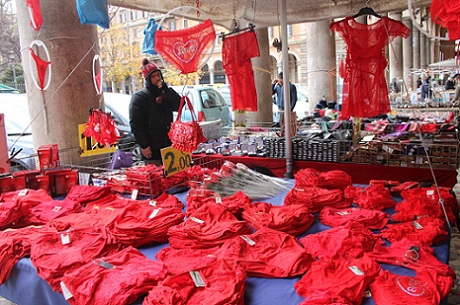 If you didn't bring your red underwear, you can easily buy a pair to wear in Rome New Years Eve!

What to do in Rome on New Years Day

Hopefully you've had a fun-filled Rome New Years Eve, and probably got to bed late. So sleep in and enjoy a nice breakfast in your hotel or apartment.

Now, what to do with the rest of the day?

Visit my page all about Rome New Years Day, for ideas about things to do and what to expect.

New Years in other parts of Italy

If you are spending New Years in another part of Italy, check out this informative, up-to-date page by Martha Bakerjian. Happy New Year!!! 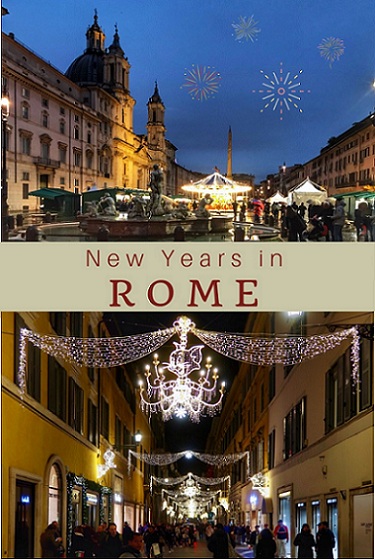 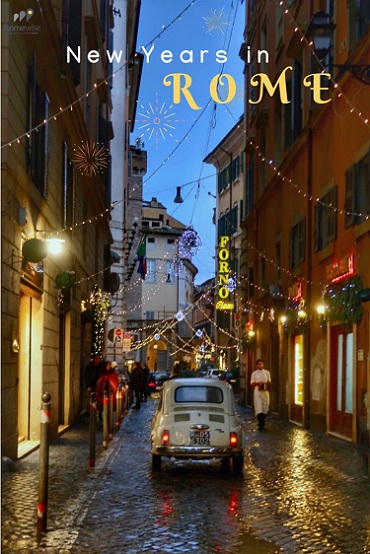